This How-to applies to:
Introduction

This forum post discusses the configuration setting that excludes the default route 0.0.0.0/0 from being exported to/from a given OSPF process running on cOS Core firewalls.
The setting will be discussed and described based on a given use case scenario.

The network architect of company X that uses cOS Core firewall appliances, wants to dynamically advertise all the routes of a specific routing table named (Datacenter_Services_RT) within the Data center site ‘which contains 200 routes’ towards all branch sites as per the Figure-1 below: 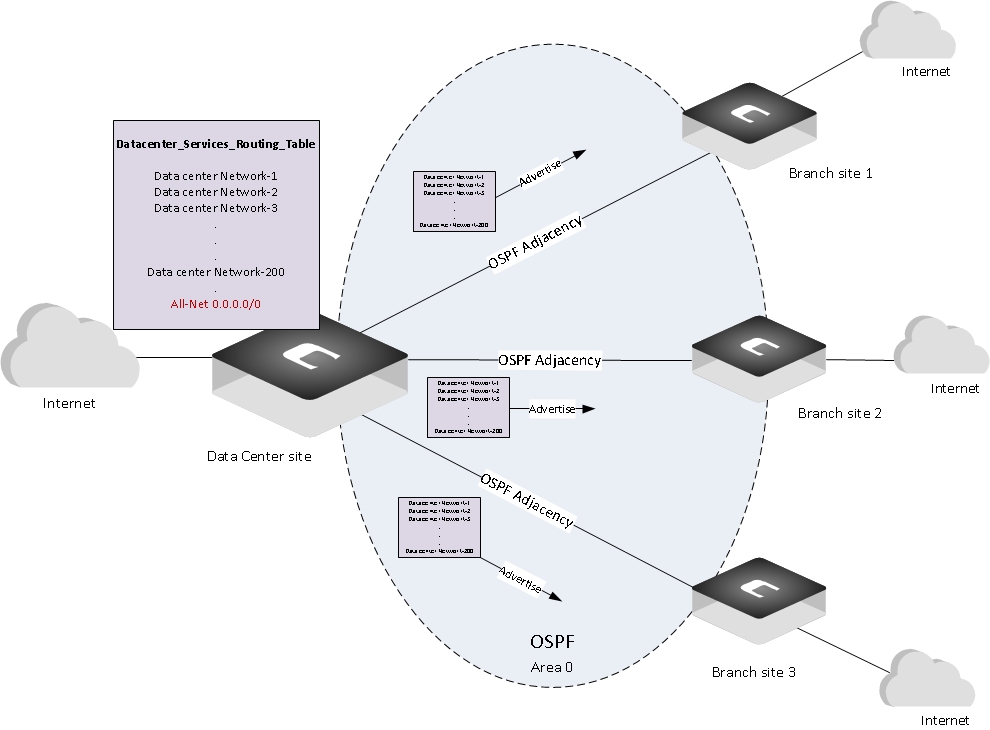 
The routing requirement the architect has studied is as the following:
Solution

Since there are many routes within datacenter firewall’s routing table to be advertised by OSPF process, and the administrator would also like to advertise all future introduced datacenter routes, it is then not efficient/scalable solution to individually select network prefixes (routes) 'within the defined routing rules' to be exported from the routing table towards Datacenter’s OSPF process.

To address this issue, assume that there is a ‘Routing rule’ already defined under the Datacenter firewall node to catch routes from Datacenter ‘routing table’ to be exported to the OSPF process as per the Figure-2 below:


The administrator can configure the ‘...Or is within:’ setting of the defined ‘Routing rule’ with the ‘0.0.0.1-255.255.255.255’ value.
This network range value includes all possible IPv4 address values except the default route value 0.0.0.0/0. In this case, the routing rule will filter out default route ‘0.0.0.0/0’ when catching routes from Datacenter’s routing table, to be exported towards the OSPF process.

Alternatively, same logic can be applied under branch firewalls instead. In this case the administrator would need to refer to the ‘Routing rule’ defined in these branch firewalls to catch routes from OSPF process to be exported towards the corresponding branch routing table and set the same network range value ‘0.0.0.1-255.255.255.255’ for the ‘...Or is within:’ setting.
Top
Post Reply
1 post • Page 1 of 1