This How-to applies to: Table of contents Pipes / Traffic shaping / Quality of Service (QoS)
Pipes are an excellent tool for creating priorities for different kinds of traffic and limit the top speed of certain types of traffic.

Pipes can either be used the "classic" way, by using Pipe Rules, but it can also be used in conjunction with Intrusion Detection and Prevention (IDP) and Application Control (AppCtrl). This article will handle the Pipe Rules method.

If there is more traffic in a given precedence level than what is guaranteed at that level, then the excess traffic is forced down to precedence level 0, where it has to compete for any remaining capacity. This means that traffic at underlying levels will have a chance to get service, even if a large amount of high priority type of traffic exists.

In the Total field of the Pipe Limits tab, the maximum amount of traffic the pipe can send (kbps) is entered. This value can not be overridden by the values entered at the precedence levels; if Total=1000, it is useless to enter Precedence 7=2000, since 1000 is the maximum.


When defining a pipe, three precendence values can be entered: Minimum, Default and Maximum. They define the available levels and what the default value is, which can be utilized in the Pipe Rules with the setting Use defaults from first pipe. It means that the traffic matching that Pipe Rule will use the precendence level defined by the Default value.

ToS (IP DSCP)
There are 8 Precedence levels, which matches the 3 bit field in the IP header describing different traffic priorities. The Map IP DSCP (ToS) field will map each IP packet to its respective precedence level.

This can be used to shape the traffic in many ways, for example to move traffic to another precedence level, to limit the total amount of this type of traffic and so on.

There are no "sanity checks" on pipe chaining, so very strange scenarios can easily be created, e.g. sending a flow of traffic several times through the same pipe, or mixing inbound and outbound traffic in the same pipe. It is completely up to the administrator to understand how pipes work and utilize them in a way that makes sense.


Grouping & Dynamic balancing
Grouping in conjunction with dynamic balancing is used for fairness between the different users/applications that use the pipes at any given moment. It avoids the problem of one user taking all traffic in a precedence level, leaving nothing for the other users, so their traffic will be forced down to P0 even though they should be qualified for a higher Precedence level, or they will even be facing starvation where they will get no service at all for a long period of time.

The fairness will, simplified, be a calculation on how many concurrent users there are, and divide the available bandwidth equally between them. 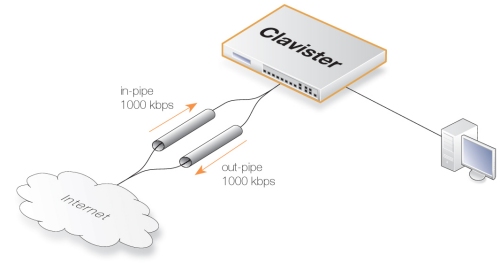 The reason we're using two separate pipes, is that it is the only way to match to the physical capacity on the external link, as it can be viewed as two separate links, one inbound and one outbound. Our pipes will be setup to match them and if the link has different speeds such as a 8/0.5 Mbps ADSL, then we just match those values on our in and out pipes.

Pipes
First, create two pipes, one for incoming and one for outgoing traffic. Set a Total limit of 1000 on the Pipe Limits tab. Enable Grouping on IP (as we have only a single local network, lan_net, and we want to balance per PC on that network) with Dynamic balancing.

Pipe Rule
Create a Pipe Rule using the pipes. This rule will use the default precedence level (P0) and by the use of pipes, limit all traffic to 1 Mbps, but with Dynamic Balancing enabled, so each of our users will get a fair amount of the 1 Mbps capacity.

The users are located on the lan interface on the lan_net (192.168.1.0/24), and we are limiting their connection to the wan interface to all-nets.

After deploying this configuration, it's time to test the pipe setup. Either simply try to surf and download files from a site near you, or use the BWTest/SimpServ tools (see separate documentation for this).

It can be wise to separate the levels used if we later wants to insert a new kind of traffic between two others.

This is the scenario for our headquarters. They have a 2/2 Mbps (symmetric) link to the Internet.
We can continue from our previous example and modify the in-pipe and the out-pipe, plus modify and create a few new rules that force the traffic into their respective precedence levels.

In the Pipe Limits tab for both pipes (we're reserving the same amount in both directions in this example), enter:
Create the needed services (VoIP uses H323 in this example, which exists as a pre-defined service), Citrix uses Port 1494.

Now create pipe rules. Remember that the rules are read top-to-bottom, hence the WebSurfing rule must be above the Other (All services) rule, or it won't have a chance to trigger.

Also remember that for traffic shaping to work well, no traffic can bypass the pipes, or it will render the traffic shaping effort useless. The reson is the greedy behaviour of TCP/IP: "I will take everything I can".

Now it's time to verify this setup, but it will be left as an excercise for the reader.


Pipe chaining
Now let's modify the example above to have several pipes in a chain. What we want to achieve is that the P2 (Other traffic) is restricted to 1000 kbps (ie. not allowed to "spill over" traffic to P0).

Create an in-other pipe and an out-other pipe and in the Pipe Limits tab for both pipes (we're reserving the same amount in both directions in this example), limit to 1000 kbps. We need not activate Grouping or Dynamic balancing, as that is handled in the in- and out-pipes.

Now, modify the Other pipe rule to use both pipes.

Take special note that the in-other and out-other pipes are first in the pipe chain in both directions. That's because we want to limit the traffic immediately, before it enters the in-pipe and the out-pipe, where it competes with the VoIP, Citrix and WebSurfing traffic!


VPN and Pipes
In the examples above, we've been shaping traffic initiated from the inside of a single Clavister Security Gateway. In many cases the entire setup includes a headquarters and one or several branch offices, connected via VPN.

In these cases, we need to create rules in the opposite direction as well, using the IPSec interface (VPN tunnel) as source respective destination.

When using VPN tunnels, we need to adapt the Total value of the pipes to allow the VPN overhead to pass through the physical pipe. A bit of experimenting might be useful, but on a 2 Mbps link, a Total value of about 1700 is reasonable.

Remember to insert all non-VPN traffic into the pipes as well, or the pipe setup won't work very well.

To achieve a good solution to the VPN overhead problem, pipe chaining is a good choice. We'll limit the traffic we insert into the VPN tunnel, allowing for the overhead, and all other traffic is inserted straight into the pipe that matches the speed of the physical link:

In the following example, we'll create separate pipes for the upload traffic and for the download traffic. We'll have VoIP via VPN with higher priority and all other traffic as best effort (We'll assuming a 2/2 Mbps symmetric link. We need to set the same guaranteed limit on both pipes, or the guarantee will be "lost" in the in- and out-pipes:
Now it's time to create the rules needed to force all traffic into the correct pipes and precedence levels:

SAT and Pipes
If you are SATing in traffic (for example to a web server, ftp server etc), you need to force that traffic too into pipes, or it will go "outside" of your pipes, and probably ruin your QoS setup.

You also need to reverse the order of the pipes: as forward pipe is your in-pipe, as return pipe is your out-pipe, due to the fact that the traffic is initiated from the outside.

A simple method is to just put a catch-all-inbound rule at the bottom of your pipe rule list, but select the external interface (wan) as source, to avoid traffic from the inside to your external ip being put into the pipes: