This how-to applies to:

This how-to assumes that you have a working Gateway certificate and root certificate. For information and guides on how to generate certificates please see one of the following articles:

Topics covered in this how-to:

Before we start setting up the tunnel we need to add two objects in the Address book and create the local user database.

Once the database has been created it will look as follows:

In this database we add the users we want to use for our IKEv2 solution as shown below:

Now we need to create two IPv4 object, the first object will be the IP Pool from where the VPN clients will be assigned an IP and the second object the DNS server that will be assigned to the connecting clients.

Note: One thing to consider is that the DNS requests are not going to be sent over the IKEv2 unless the DNS server is on the same subnet (192.168.1.0/24). One way to get around this is to assign the client a “Fake” DNS for example a core route IP in the same network range (192.168.1.0/24) and then use a SAT or NAT/SAT IP Policy to forward the traffic to the correct IP.

The configuration used in the Clavister Next Generation Firewall:

In this example we will use the Simplified VPN Client object which simplifies roaming client setup. In order to create a VPN Clients object go to Network -> interface and VPN ->VPN and Tunnels ->IPsec click add and add a new “VPN Clients (Simplified)” 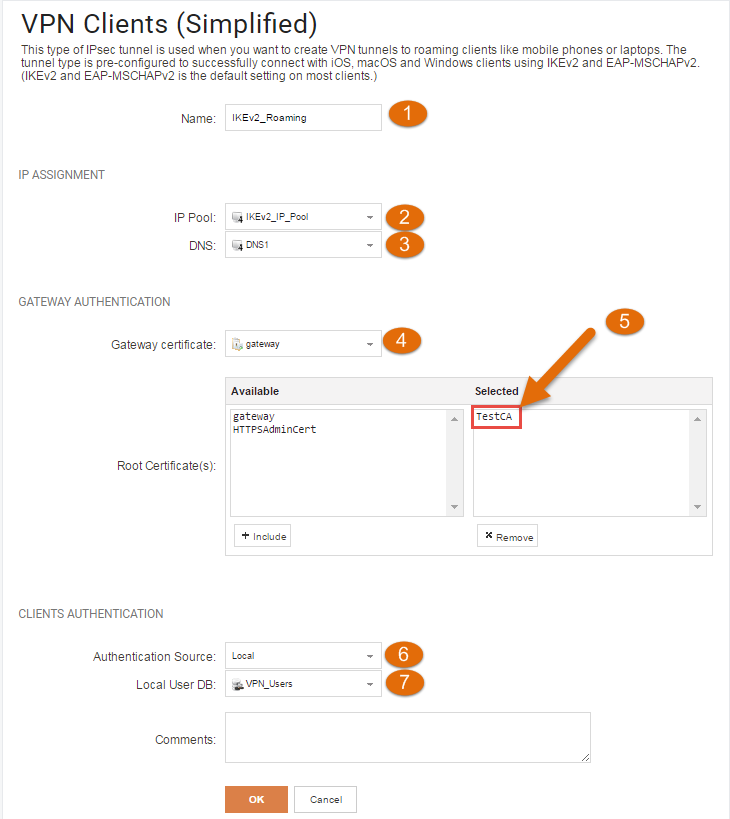 The “VPN clients” object will create an EAP authentication rule in the background. One thing we need to do in order for this to work is to add a new route and proxy ARP the IKEv2_IP_Pool on the internal interface (GESW in this example).

1. The interface should be the IKEv2 tunnel.
2. Assign the network parameter the IKEv2_IP_Pool.

Under the Proxy ARP tab add the internal interface as shown below:

Important: We need to add this route in order for the clients on the inside to know where to send the return traffic.

When clients connect, cOS Core will setup a single-host route for the IP the client receives from the IP pool but since the Proxy ARP and the routes are using separate sub-processes they are looked at separately. So even though the Proxy ARP route does not primary match (as it is bigger than the single-host route), it will still respond to the ARP query and the scenario will start to work.

We only need one IP Policy since we have configured partial split tunneling and we only want to allow access to a specific internal network.

First of all we need to create the new VPN connection as shown by the following picture: 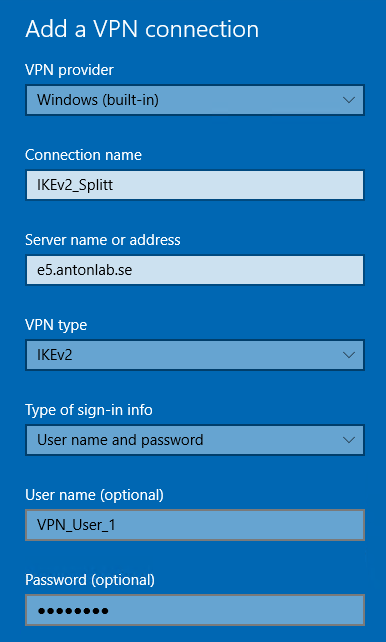 In order to achieve split tunneling we need to disable “Use default gateway on remote network” on the VPN NIC which can be found under Properties -> networking -> Properties if you right click on the NIC. If you don’t want to enable Split tunneling you can skip the rest of the steps. 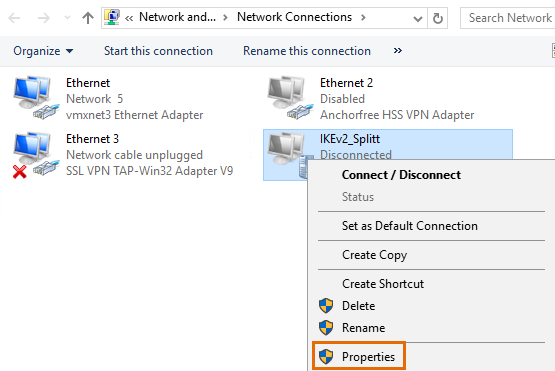 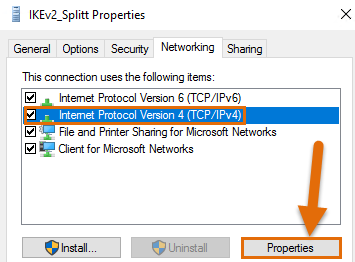 Now we are done and the only traffic that should be routed over the IKEv2 tunnel is now the 192.168.1.0/24 network, everything else will use the normal internet route on the client.
Top
Post Reply
1 post • Page 1 of 1