This document assumes that you already got the Security Gateway up and running. If not, please consult the proper documentation for this.

Topics covered in this document

Clavister - Preparing objects used by the gateway
First of all we need to create all needed objects.

Preparing the Host & Networks
The first thing to do is to add all objects needed by the PPTP tunnel, that is the network, the IP range that is going to be assigned to the PPTP clients and the IP used by the PPTP Server.

When this is done, we should have three new object in the Host & Networks, it should look something like this:

Preparing a new Local User Database
To be able to authenticate the users using the PPTP tunnel a local user database will be used, this can of course also be a RADIUS server. Create a new database under System -> Users -> Local Databases.
In this How-to a user database named LocalUsers will be used.

NOTE:There is no need to define groups to get PPTP up and running. But groups could later be used in the rules to setup different policies based on group membership.

Name
First of all, a name is needed for the PPTP interface. This virtual interface will be used later in the rules and user authentication rules sections.
In this example, the name PPTP_Tunnel is being used.

Inner IP Address
This IP should be a part of the network which the clients are assigned IP addresses from, in this case it should be PPTP_IP (192.168.0.1).

Outer Interface Filter
This is the interface that the PPTP server will accept connections on, in this scenario any or ext has to be selected.

Server IP
This is the IP that the PPTP server is accepting connections on. Normally this is the same as the IP of the Outer Interface, i.e. Wan_ip. 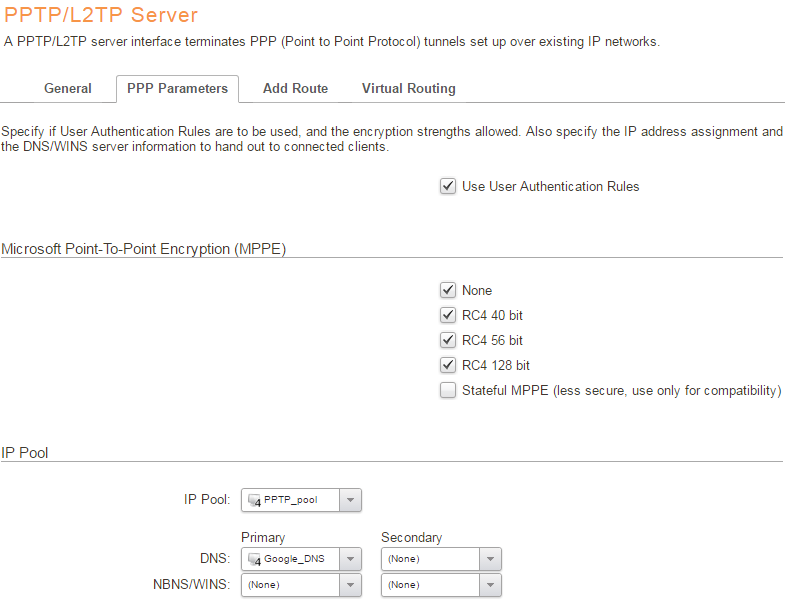 Authentication
Should be enabled, and a rule needs to be configured, (see further down).

IP Pool
Specify the addresses that are to be assigned to the clients. In this case use the pool created earlier, PPTP_pool. Also specify up to two DNS and WINS servers. 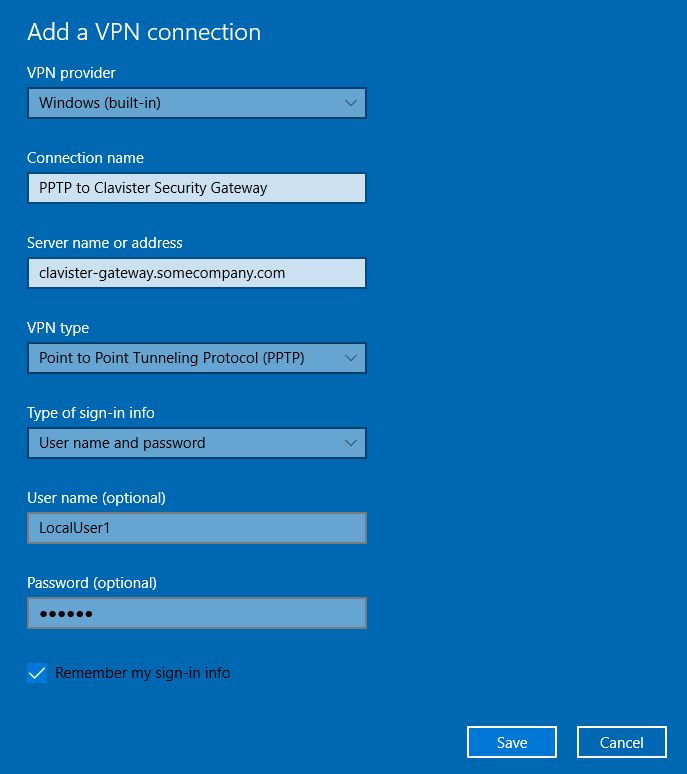 A ProxyARP needs to be configured for the IP's used by the PPTP Clients. What we do is publish the IP's from the PPTP_pool on int and the PPTP server will automatically route them over the PPTP_tunnel interface.

The PPTP Server will automatically add routes to the PPTP Clients and route them over the PPTP_tunnel interface. Select which routing table those routes should be added to. In this guide we will use main which is the ordinary routing table.

Clavister - Setting up the User Authentication Rules
A user authentication rule needs to be configured as below:
Name: PPTP_Auth The rule should look like this: 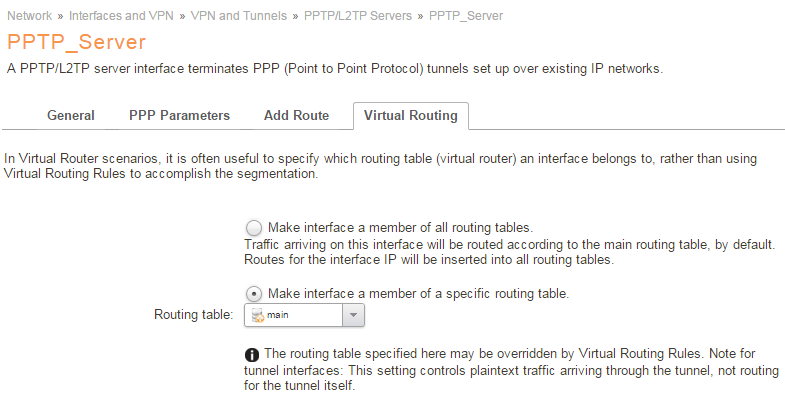 Clavister - Setting up the Policies
When the other parts are done, all that is left is the policies. To let traffic trough from the tunnel to the Lan_net and to the internet two policies should be added with the following characteristics:

Windows 10 - Setting up the VPN connection
To setup the new PPTP network connection in Windows 10, in Settings press Network & Internet -> VPN -> Add a VPN connection, then enter the information for the PPTP connection.

Server name or address
Type in the hostname or IP of the Clavister Security Gateway you are connecting to.

VPN type
Since we want to set up a PPTP connection we choose “Point to Point Tunneling Protocol (PPTP)”.

Username (optional)
Here you enter the Username of the user you want to connect as, in this example we use the user we created earlier, LocalUser1. This is optional, if you don’t fill this in you will get a pop-up asking for your username and password. 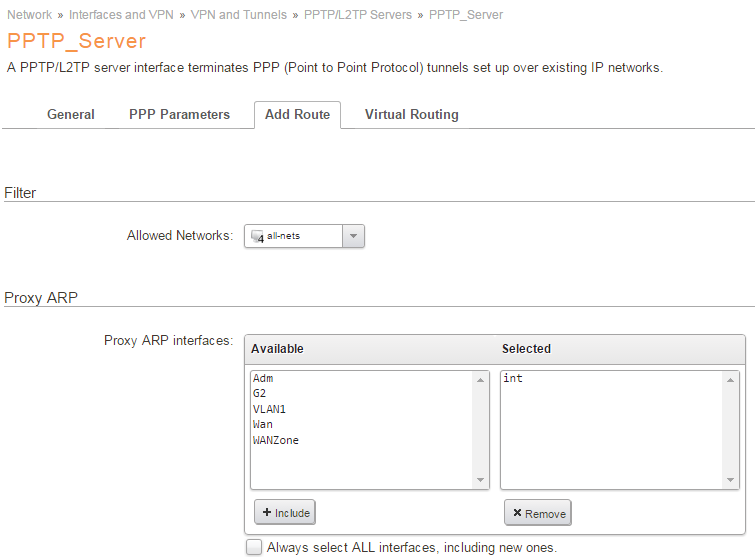 Click save and you should now be able to connect to your Clavister Security Gateway with PPTP.
Top