This FAQ applies to:
Question:

Why can i only use PAP (unencrypted passwords) when authenticating with LDAP using an L2TP/IPSec, PPTP or SSL VPN towards Microsoft Active Directory? I want to be able to use Chap, MS-CHAP or MS-CHAPv2.

With the introduction of LDAP as authentication method in version 9.10.00 it has been possible to setup a user authentication rule in the SGW that connects to an LDAP server for user credential authentication.

A problem can arise when using a PPTP tunnel towards an SGW that is in turn linked to an MS AD using LDAP. The only authentication method that works in this scenario is PAP (unencrypted passwords).

This is particularly bad for PPTP as the username/password is sent as a part of the PPP negotiation, before MPPE encryption is enabled. When using other VPN tunnels such as SSL VPN or L2TP/IPsec the username/password are sent inside an encrypted tunnel. In that case, it does not really matter if the passwords are unencrypted (PAP) on the inside, as they are transported as encrypted data anyway. 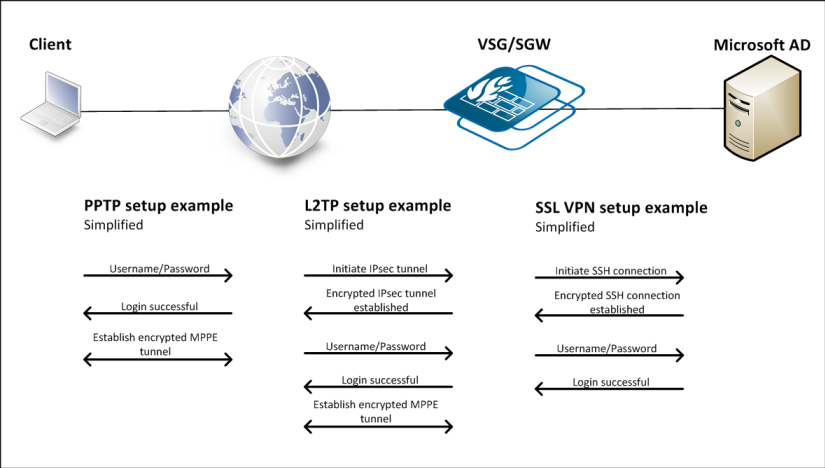 The reason why only PAP works is related to how the LDAP protocol is defined, together with the way passwords are stored by the Microsoft Active directory.

To be able to support any other PPP authentication method on a PPP server connected to LDAP, the password would need to be retrieved from the LDAP server. In cOS core, this is implemented by letting cOS Core authenticate to the LDAP server using an administrator account, and ask for information about the specific user trying to gain PPP access.

There is however no legitimate way to retrieve the userPassword from Microsoft Active Directory trough LDAP. The LDAP protocol itself supports this, but Microsoft has intentionally implemented this as a write only attribute in Active Directory. The password can be changed but not retrieved. (additionally, the AD stores a password hash, not the password itself).

Alternative 1 – Description field:
Alternative 2 – RADIUS
Why use LDAP then?